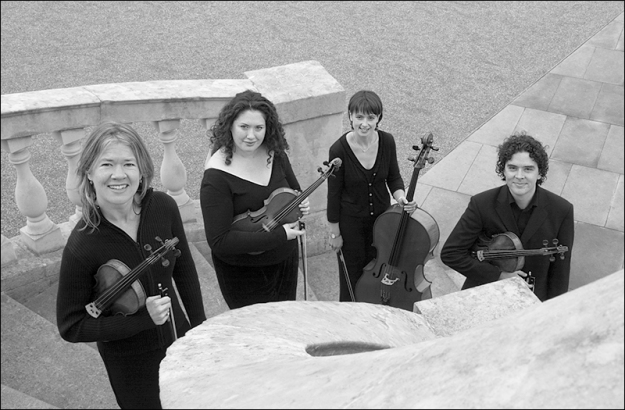 The Thamesis String Quartet is a professional ensemble that is available for engagements in London and the South East.

The quartet has over 19 years experience, and provides an exceptional standard of playing and a wide range of music for all occasions including weddings, receptions, corporate events, christenings and parties.

The Thamesis String Quartet was formed in 1991 whilst its four members were studying at the Royal College of Music. The ensemble studied with the Chilingirian Quartet and won the TSW Award to study with the Brodsky Quartet as part of the Dartington International Summer Festival.

They have also worked in shows such as Les Miserables and Chitty Chitty Bang Bang in the West End, and toured with the Carl Rosa Opera Company in their productions of The Merry Widow, Die Fledermaus, The Pirates of Penzance, Iolanthe and The Mikado.

Our clients regularly send us “thank you” letters. Here are just a few of the comments we have received:

"We would like to say a massive thank you to you and the rest of the quartet for playing at our wedding on the 12th June. You really made it very special to us. The music was fantastic and all the guests really enjoyed it. I will definitely be recommending you to anyone who would like a string quartet to play at any event as I think you were fantastic."

"We want to thank you so much for playing at our wedding - you were all fantastic! We have had so many comments and letters from our guests saying how wonderful you were. I'm so glad you got such applause when you left!"

"...[we] would like to thank you guys very much for playing at our wedding. The pieces you played were beautiful and made our day that little bit more special. Many of our guests commented on the music and the wonderful atmosphere it created."

"We had such a magical day and loved every second of it. Thank you for being such an important part of a special day. Huge thanks and best wishes."